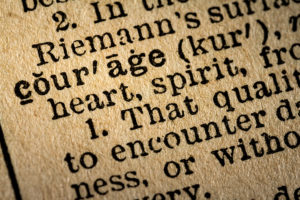 “Joseph, he of Arimathea, noble and honorable in rank and a respected member of the council (Sanhedrin), who was himself waiting for the kingdom of God, daring the consequences, took courage and ventured to go to Pilate and asked for the body of Jesus.” (Mark 15:43 AMPC)

Unlikely character for the Easter story.

Respected member of the Sanhedrin.

And covert follower of the Nazarene Jesus.

Did he sit silently at the mock trial?

Was he a voice of reason amidst the hatred?

Or did something simply snap in Joseph between the wee morning hours and those of late afternoon that Good Friday?

Because this “secret” follower of Jesus gathers his courage, heads to the Roman Praetorium, and asks for the body of a crucified “criminal.”

Did he lock eyes with Pilate? Did Pilate offer an unspoken apology as he released the body to Joseph?

As the covert disciple goes public, Joseph knows there is no turning back. He’s set himself in opposition to the most powerful Jews in Jerusalem—Annas and Caiaphas.

John’s gospel tells us Joe had a partner. Nicodemus, whose own encounter with the Savior came under cover of darkness, brings about 100 pounds of myrrh and aloes and helps Joseph prepare the body for burial. It’s a quick job as the sun sinks, and the Sabbath begins. Joseph’s own tomb is nearby, brand spanking new. They place the body inside, roll the stone against the opening, and leave, fully prepared to face whatever consequences might come.

Loss of job. Loss of status.

Rejection. From old friends. From family.

And note, this decision was made before the resurrection, not after.

Did Joseph and Nicodemus join the group of mourners that weekend? Were they present Easter morning when news came of the resurrection?

What happened to these two? Scripture doesn’t tell us.

But one thing is for sure, when Joseph offered his tomb on Good Friday, it was for keeps.

Who knew that by Easter Sunday it would turn out to be only a loan?

When are you tempted to go dark? To be a covert disciple?

What would cause you to take a public stand?

Have you ever taken a risk for God?

Was the result what you expected?